What is the Series 65 exam and how should you prepare for it? Read Solomon Exam Prep’s guide to the NASAA Series 65 exam. Continue reading 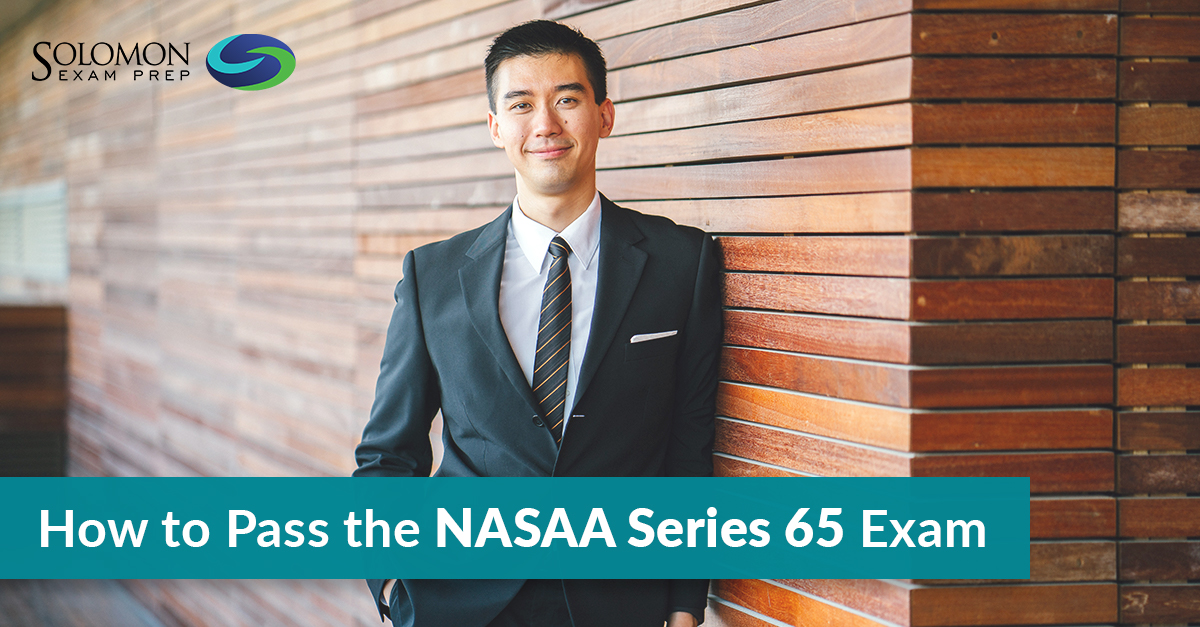 What does the NASAA Series 65 allow me to do?

The Series 65, also known as the Uniform Investment Adviser Law Examination, qualifies individuals to give investment advice for a fee. Investment adviser representatives (IARs) use their knowledge to give financial advice and help clients build investment portfolios. IARs might provide general investment advice or recommend a client to invest in a specific security. IARs can also manage client accounts and supervise other IARs.

The organization that creates the test—the North American Securities Administrators Association, or NASAA—works to protect investors in every state, territory, the District of Columbia, Canada, and Mexico. Requiring investment adviser representative candidates to pass the Series 65 is a key tool in the NASAA’s investor protection arsenal. Regulators want to make sure people who are giving investment advice in their state or jurisdiction are competent and will behave legally and ethically.

The Series 65 exam consists of 130 scored and 10 unscored multiple-choice questions covering the four sections of the NASAA Series 65 exam outline. The 10 additional unscored questions are ones that the exam committee is trying out. These are unidentified and are distributed randomly throughout the exam. NASAA updates its exam questions regularly to reflect the most current rules and regulations.

Topics Covered on the Exam

The NASAA divides the Series 65 exam into four sections:

The Series 65 exam covers many topics including the following:

Question Types on the Series 65

The Series 65 exam consists of multiple-choice questions, each with four options. You will see these question structures:

This item type asks a question and gives four possible answers from which to choose.

Which of the following actions might the Federal Reserve take if it wishes to stimulate the economy?

This kind of question has an incomplete sentence followed by four options that present possible conclusions.

A recession is a protracted period of decline in the national economy, typically defined as:

This type requires you to recognize the one choice that is an exception among the four answer choices presented.

All of the following are tools that the Federal Reserve uses to implement monetary policy except:

This question type has a missing word or phrase, which you must select from the four options provided.

For this question type, you see a question followed by two or more statements identified by Roman numerals. The four answer choices represent combinations of these statements. You must select the combination that best answers the question.

A stronger dollar benefits which group?

This format is also used in items that ask you to rank or order a set of items from highest to lowest (or vice versa), or to place a series of events in the proper sequence.

Order the following from lowest to highest:

How to Study for the Series 65

Use these effective study strategies:

You can pass the NASAA Series 65! It just takes work and determination. Solomon Exam Prep is here to support you on your journey to becoming a registered Investment Adviser Representative.