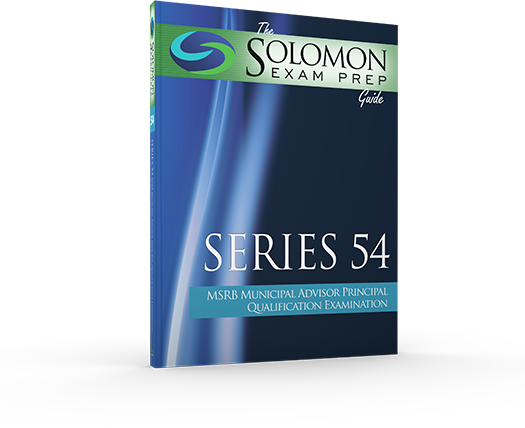 Have you heard about the Series 54?

Do you want to become a Municipal Advisor Principal?

If you are interested, you can read the MSRB's announcement here.

The MSRB will “pilot” (that is a test run) of the Series 54 exam from February 2019 through June 2019. Municipal advisor principals who want to take the Series 54 pilot exam will have a 2-week period in February in which to sign up for the Series 54 pilot exam via FINRA's CRD and then applicants will have a 120 day window in which to take the exam. No retakes will be permitted. Pass info and scores won't be determined for several months, according to the MSRB. If an individual achieves a passing score or better on the Series 54 exam, the individual will be considered qualified as a municipal advisor principal when the MSRB permanently establishes the Series 54.

Every test-taker receives a unique sample of 100 questions that are drawn from the collection of test questions available for the Series 54. Like FINRA and NASAA securities licensing exams, the MSRB ranks test questions by difficulty, although it does not make this information publicly available, to insure that the overall difficulty of every person's Series 54 exam is the same.

Like the Series 53, the Series 24 and other principal-level securities exams, the regulators want the municipal advisor principal candidates to know their business and, most important, they want applicants to know the supervisory rules. This means a lot of memorization. For example, the Series 54 content outline lists the following items:

What are people saying?

Solomon has been the gold standard for our team for studying and passing! The information was presented clearly and everyday language. I did take the series 6 twice, due to testing anxiety, but I passed the 6 with 73%. I took my 63 one month later, and passed with 82% !!

I just passed the Series 79 exam. You guys rock! And your price beats the competitors'. Thanks for the great materials.

I passed the Series 65 on the first try and I would absolutely give credit to this tool. We all learn in vastly different ways, so having the options available for a study guide, audiobook, video training, flash cards, practice tests - and ALL of the other resources available was critical to my success. I've been out of school for over a decade and remembering HOW to study was hard. I'm so glad I had all of these options.

Jeremy, I passed the Series 7 yesterday with an 87% using only your book and online practice tests. Thanks!