For many when choosing bonds the most important factor is the tax implications. Knowing the after-tax yield and tax-equivalent yield calculations is critical. Continue reading

Bonds can be nice, reliable investments. Pay some money to an issuing company or municipality, receive interest payments twice a year, and then get all of your original investment back sometime down the road. Sounds like a plan.

But which bonds are best for a specific investor? There are many factors for bond investors to consider when choosing which bond to buy, but for many the most important is the tax implications of investing in one bond instead of another. This concern is most prominent when an investor compares a corporate bond to a municipal bond. For reference, a corporate bond is one issued by a corporation or business, while a municipal bond is one issued by a state, city, or municipal agency.

Comparing the tax implications of these bonds is important because the interest payments that investors receive from municipal bonds are typically not taxed at the federal level. Conversely, interest payments on all corporate bonds are subject to federal taxation. This means that someone in the 32% tax bracket will have to give Uncle Sam 32% of his interest received from a corporate bond, while he will not give up any of his interest received from a municipal bond. Additionally, an investor does not pay state taxes on municipal bond interest if the bond is issued in the state in which the investor lives. Corporate bond interest, on the other hand, is always subject to state tax.

For these reasons, when comparing a corporate bond to a municipal bond, understanding the after-tax yield and the tax-equivalent or corporate-equivalent yield is essential. This is true both for investors and for those who will be taking many of the FINRA, NASAA, and MSRB exams. So let’s look at how to calculate those yields. 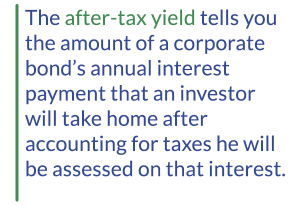 The formula for after tax yield is:

On the other hand, an investor always pays state taxes on interest received from corporate bonds. So if you see an exam question in which you need to calculate the after-tax yield of a corporate bond to compare it the yield on a municipal bond, you will always subtract the investor’s federal income tax rate from 1 in the equation. You will also subtract the investor’s state tax rate from 1 if the municipal bond is issued in the investor’s state of residence.

Marilyn is a resident of Kentucky. She is considering a bond issued by XYZ Corporation. The bond comes with a 7% annual interest rate. Marilyn is also interested in purchasing municipal bonds issued in Ohio. If Marilyn has a federal tax rate of 28% and Kentucky’s state tax rate is 4%, what is the after-tax yield on XYZ’s bond?

To answer this question, begin with the interest rate on the XYZ bond, which is 7%. Then subtract from 1 the taxes Marilyn will not pay if she invests in the municipal bond in question. She will not pay federal taxes on the municipal bond interest, so you would subtract 28%, or .28. However, because Marilyn is a resident of Kentucky and the municipal bonds she is considering are issued in Ohio, she will pay state taxes on the bond. That means you would not subtract her state tax rate (0.04) from 1. After subtracting .28 from 1 to get 0.72, you multiply that amount by the 7% coupon payment. Doing so gives you a value of 5.04 (7 x 0.72 = 5.04%). This means that the interest amount she would take home from the XYZ bond would be equivalent to what she would receive from a municipal bond issued in Ohio that has a 5.04% interest payment. If she can get a bond issued in Ohio that has a higher interest payment than 5.04%, she would take home more money in annual interest payments than she would from the XYZ bond. 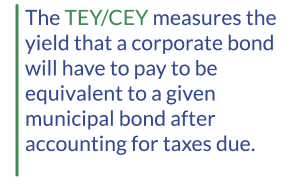 The second approach an investor can take to compare how a potential bond investment will be affected by taxation is to calculate the tax-equivalent yield (TEY). This calculation is also known as the corporate-equivalent yield (CEY). The TEY/CEY measures the yield that a corporate bond will have to pay to be equivalent to a given municipal bond after accounting for taxes due. To calculate this yield, you take the annual interest of the given municipal bond and divide it by 1 minus the taxes the investor will not pay if she invests in the municipal bond that she would pay if she invested in a corporate bond.

Here’s the formula for tax-equivalent yield:

Here’s another question to provide context.

Franz, a resident of Michigan, has purchased a Michigan municipal bond that pays 4% annual interest. If his federal tax bracket is 30% and the Michigan state tax rate is 4%, what interest rate would he need to receive on a corporate bond to have a comparable rate after accounting for taxes owed?

To answer this question, begin with the interest rate on the Michigan municipal bond, which is 4%. Then subtract from 1 the taxes that Franz will not pay on that bond that he would pay if he invested in a corporate bond. He wouldn’t pay federal taxes on the municipal bond interest, so you would subtract 0.30 from 1. Additionally, since the bond is issued in Michigan and he is a Michigan resident, Franz will not pay state taxes on the bond. So you subtract Michigan’s state tax rate of 4%, or 0.04, from 1 as well. After subtracting 0.30 and 0.04 from 1 to get 0.66, you divide that number into the 4% municipal bond annual interest. Doing so gives a value of 6.06 (4 / 0.66 = 6.06). This means Franz would need to find a corporate bond that pays 6.06% in annual interest to match the amount of interest he will take home annually from the Michigan municipal bond after accounting for taxes.

Many people are confused by the concepts of the after-tax and tax-equivalent yields. But you don’t have to be one of them. Just follow this simple approach and any questions you see on this topic will not be overly taxing.