Learn what the FINRA Series 6 qualifies you to do, what the exam covers, and how you should prepare for it. Continue reading 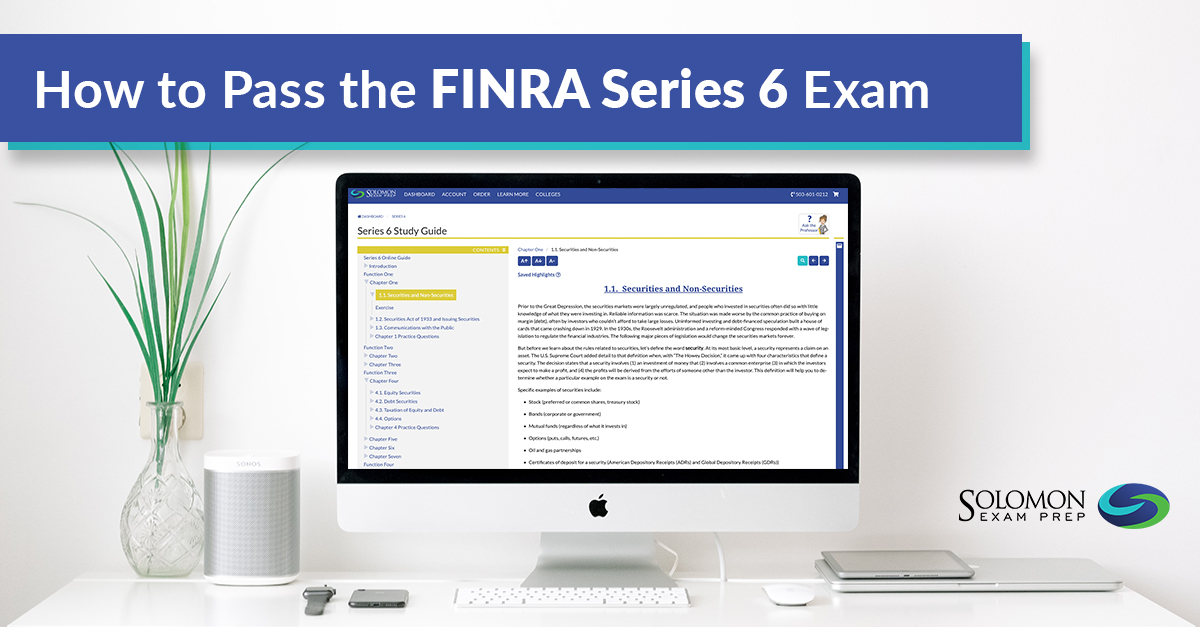 What does the FINRA Series 6 exam allow me to do?

The Series 6 does not entitle you to sell all securities products – for that, you’ll need the Series 7. But if you intend to only sell the products listed above, then the Series 6 exam may be an attractive option since it is shorter than the Series 7.

Common jobs in the securities and financial services industries that use the Series 6 are investment advisers, financial advisers, insurance agents, retirement plan specialists, and private bankers. Be aware, though, that some jobs might require other exams or qualifications in addition to the Series 6, depending on the duties required for a particular job. Salary ranges vary among these types of jobs, but the average base salary of people with a Series 6 certification is $56,000 per year (payscale.com).

To take the Series 6 exam, you must be sponsored by a FINRA member firm. The firm files a Form U4 application on your behalf through FINRA’s Central Registration Depository (CRD). Candidates must pass the co-requisite Securities Industry Essentials (SIE) exam in addition to the Series 6 to obtain the Series 6 license. Although you can take the exams in any order, Solomon Exam Prep recommends taking the SIE exam first because it is a foundational exam. Anyone 18 or older can take the SIE exam, and it doesn’t require firm sponsorship.

The Series 6 exam consists of 50 scored and 5 unscored multiple-choice questions covering the four sections of the FINRA Series 6 exam outline. The 5 additional unscored questions are ones that the exam committee is trying out. These are unidentified and are distributed randomly throughout the exam. FINRA updates its exam questions regularly to reflect the most current rules and regulations.

Topics Covered on the Exam

FINRA divides the Series 6 exam into four sections which represent the four job functions of a Series 6 registered representative: 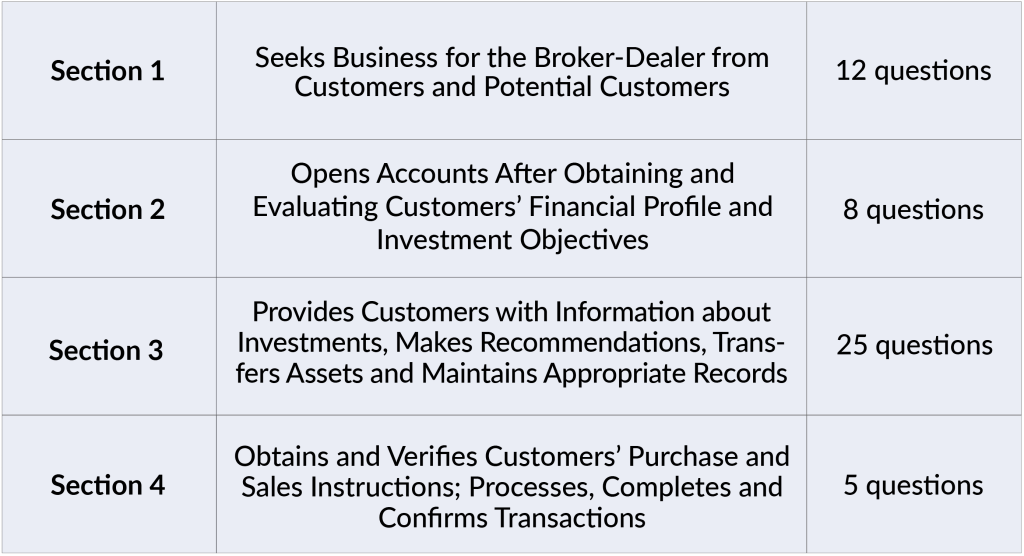 The Series 6 exam covers many topics including the following:

Question Types on the Series 6

The Series 6 exam consists of multiple-choice questions, each with four options. You will see these question structures:

This item type asks a question and gives four possible answers from which to choose.

In the cooling-off period, which of the following would not be allowed?

This kind of question has an incomplete sentence followed by four options that present possible conclusions.

This type requires you to recognize the one choice that is an exception among the four answer choices presented.

All of the following would be considered a security except:

For this question type, you see a question followed by two or more statements identified by Roman numerals. The four answer choices represent combinations of these statements. You must select the combination that best answers the question.

Regarding its telemarketing efforts, a firm or its representative must do which of the following?

This format is also used in items that ask you to rank or order a set of items from highest to lowest (or vice versa), or to place a series of events in the proper sequence.

Rank the following yields for a premium bond held to maturity from highest to lowest.

For an even better idea of the possible question types you might encounter on the Series 6 exam, try Solomon Exam Prep’s free Series 6 Sample Quiz.

How to Study for the Series 6

Use these effective study strategies:

You can pass the FINRA Series 6! It just takes focus and determination. Solomon Exam Prep is here to support you on your journey to becoming a registered Investment Company Products/Variable Life Contracts Representative.